Immigration in the 1920's and Today 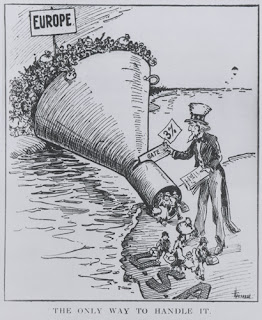 This political cartoon illustrates the isolationist policy that swept over the United States after the end of World War I. This eventually led to new policies regarding immigration. 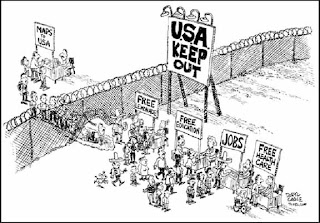 Define Assimilation
Explain why nativists opposed immigration
From today's lesson:
Students will demonstrate the ability to:
Explain why the United States restricted immigration from Eastern European countries with the Immigration Act of 1924
Explain what the Red Scare was and how it contributed to Anti-immigration sentiments in the United States.
Materials:
Reading: "Combating Anti Muslim Bias" from the Spring 2011 issue of Teaching Tolerance
http://www.tolerance.org/magazine/number-39-spring-2011/combating-anti-muslim-bias
Reading:
"10 Myths about Immigration" from the Spring 2011 issue of Teaching Tolerance: http://www.tolerance.org/magazine/number-39-spring-2011/10-myths-about-immigration
Interactive Phase:
Start with Review Questions:
1. What was the Red Scare: Fear of Communism
2. Why couldn't Sacco and Vanzetti receive a fair trial? They were immigrants whom were highly disliked.
Students have been studying the 1920's and this lesson provides students with the opportunity to compare immigration in the 1920's and today. This lesson focuses on a number of short readings, political cartoons, and group discussion. If you would like the worksheet I use in the previous lesson, "Italian Immigration" please feel free to contact me and I will provide it for you.
In addition, ﻿this months issue of Teaching Tolerance is benificial to this lesson. Here's the link: http://www.tolerance.org/magazine/number-39-spring-2011 I found the readings from this issue.
1. For an opening activity, read "10 Myths about Immigration" from April's issue of Teaching Tolerance: http://www.tolerance.org/magazine/number-39-spring-2011/10-myths-about-immigration
Discuss with students.
2. Read "Combating Anti Muslim Bias" aloud.
Reading: http://www.tolerance.org/magazine/number-39-spring-2011/combating-anti-muslim-bias
Ask students for their feedback. Some questions could include: How are the experiences of Muslim students the same/different to immigrants living in the United States today? Can you think of any other times in history where a certain group of people has been targeted?
Posted by miprince at Monday, April 25, 2011