This websites provides a quick summary of the 1920's, the Stock Market Crash, the Great Depression, and the New Deal Click here! 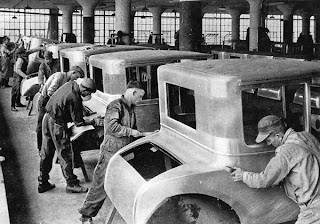 
Objectives:
Students will learned what caused the economic boom in the United States in the 1920’s.
Introduction:
Anticipatory Set/ Focusing Event:
1.      Provide students with today’s objectives
2.      Students should copy new vocabulary into their notebooks.
a.      Gross National Product (GNP): The total value of all goods and services produced.
b.      Scientific Management: Hired experts studied how well could be produced more quickly. By adopting these methods, businesses sought to lower costs and increase productivity.
c.       Mass Production: Mass production is the production of large amounts of standardized products, especially on assembly lines.
d.      Installment Buying: Buying on credit
e.       Prosperity: Wealth, riches, success, fortune, etc.
f.        Cycle of Prosperity/Economic Boom: Mass production led to more products that needed to be sold, which led to more jobs and more spending. People were confident so they were spending more money.
Instructional Phase:
1. Project an image of Henry Ford. Ask students to take out a scrap piece of paper. Have students write a quick response to the following question. Why is Henry Ford a significant player in United States history?
Henry Ford helped to create a middle class. Through mass production he made automobiles affordable, even for his workers. Mass production in the 1920’s led to prosperity in the United States for many Americans. American’s were very confident about the economy. Many people were purchasing big household items through installment buying, or buying on credit.
2. United States in the 1920’s Notes (See below)
Discussion Questions:
3.  Now students will create their own assembly line to demonstrate the division of labor in an assembly line. Explain to students that each factory worker typically worked with the same parts every day.
Divide students into groups of 4 or 5 depending on class size. Provide each group (with four-five students) with a zip lock bag with the following pretend sandwich materials inside:
These can be made with construction paper, cardstock, felt, etc.
1.      Two pieces of bread
2.      One piece of cheese
3.      One tomato
4.      One piece of meat
5.      One piece of lettuce
Divide students into groups and have them create a plan using scientific management to create the best way to run their sandwich shop utilizing all members of the group.
Discussion Questions:
How would you have felt if you had to work at a sandwich shop by yourself? How does this relate to the impact of assembly lines?
4. Closure: Review Questions:
1. What is the 18th Amendment? The 18th Amendment prohibited the sale of alcohol. It was believed by some that alcohol was the root of crime, immortality, accidents on the job, etc.
2. Why did prohibition fail? Variety of answers: The government cannot legislate mortality, promoted disrespect for the law, gave birth to organized crime, etc.
5. Extending Activity: Imagine you traveled back in time to the 1920's. Write a journal entry describing one of the major aspects of 1920's culture. The journal entry must be one paragraph (8-9 sentences) in length. You may choose from the following topics: Prohibition, Women's Rights, Workers Unrest (Strikes), Henry Ford and Mass Production of the Automobile, Women's Rights, Scopes Trial, and Immigration.
Posted by miprince at Monday, April 25, 2011